So, one thing I hear a lot at the moment is that Paleo is a “diet” [as in, a method to lose weight].  That its “like the Atkins diet”, which, for those who don’t know it, is a high protein, high fat diet that embraces processed foods. There are loads of pictures of people ‘before and after’ Paleo and I’ve yet to see one where the subject wasn’t skinnier in the ‘after’ [although I can imagine that such a person would not likely display their failure].

That said, I’ve never thought of Paleo as a way to lose weight. It’s been about eating healthier and feeling better, physically.  Losing weight has been a side effect.  For both myself and my husband, weight started to drop off within two weeks of going Paleo.  It involved no conscious decision or effort by either of us.

I know for certain its due to the change to Paleo because the day I start to eat ‘bad’ foods, the weight starts to return. I kid you not.  Here is the chart of my weight since Feb, when we started Paleo: 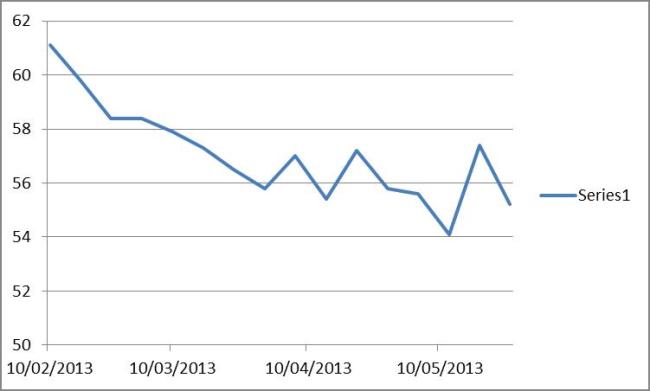 I have had 3 ‘non-Paleo’ [NP] periods since Feb; for just over a week at the end of March/beginning April, again from 12-19 April and then recently when I went to Lombok mid-May.

Now here’s the same chart, with those three periods highlighted: 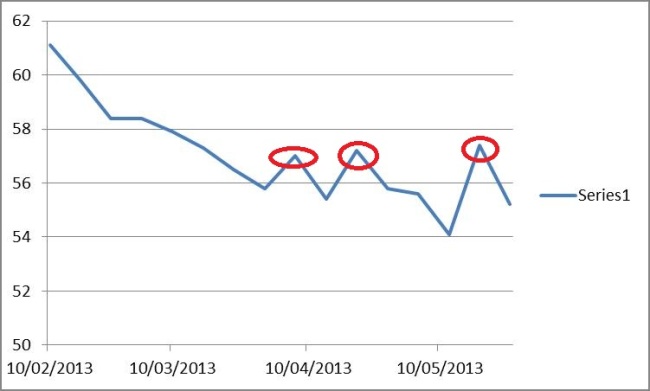 The results are fairly conclusive in my personal case!

I notice it physically the day I go NP.  It does depend on what I eat as to how quickly I feel it – for example within 1/2hr of eating a chicken & avocado focaccia a few weeks ago I was in a fair bit of discomfort – stomach cramps, bloating and generally feeling sick.  Whereas something like a one-off pasta I can tolerate a lot better.  But if I fall right off the wagon, by the next day I can feel it.  I feel sluggish, heavier and whatever the opposite of lean is.  And the weight starts to creep on immediately.

Thankfully, if I get back on the wagon, the opposite is also true. Within about 24 hours I feel cleaner and lighter.  And I am lighter – within a week I will be back to the weight I was before the deviation.

This draws me to the conclusion that the extra weight that I was carrying is created and sustained by processed foods, sugar, dairy and grains.  When I stop consuming those types of foods and replace them with nutritious vegetables, meat, fruit, fats and eggs, my body is able to flush the ‘crap’ out and so, I lose weight.  Start eating them again and they stockpile faster than I can get rid of them. I’d almost bet on sugar being one of the main culprits, and also over consumption of carbs via grain eating.  We just can’t process sugar in the ginormous amounts we consume via processed food and drink, so it sticks and causes fluffiness, bloating, nausea.  And unless you are an elite athlete, the amount of carbs most people consume is never going to get utilised as fuel so it ends up as stores.  Energy in = energy out right?  So if you consume it but don’t use it, you store it as gained weight. And let’s be frank, while we aren’t talking about a lot in my case, maybe 5-6 kg, this figure represents approx. 10% of my body weight so it is worth mentioning.

That all said, I do know people on Paleo who haven’t seen any change from their pre-Paleo weight – unsure why and of course everyone is different. Individual circumstances need to be taken into account too, I guess.

So is Paleo good for weight loss? I have to say no.  Because, I firmly believe if weight loss if your motivation for going Paleo, you are going to fail.  It’s just too easy to get discouraged and stop.  Anyone I know who’s tackled this way of eating specifically to lower the numbers on their scales has not lasted a week.  Paleo needs to be a lifestyle change for the right reason – overall health and well-being – for it to stick… if you don’t lose 5 kilos you won’t feel discouraged because that’s not your goal. So you’re more likely to stick to it, get healthier and probably lose five kilos along the way.

I do encourage anyone who’s curious or doesn’t feel good physically right now to give it a go, for sure. But give it a proper go – 30 days at least.  Take all your measurements ‘Pre-Paleo’, take photo’s, whatever.  Then put away the scales, tapes and cameras and dedicate yourself to researching foods and recipes, reading blogs and books. Learn something new, try different fruits and vegies, get creative with spices.  Take note of your clothing – is it getting looser? Record how you feel.

After thirty days later – reassess. Re-take your measurements and photos.  Ask yourself, was it worth it? Is how you look and feel now worth giving up some of your favourite foods? Choose your path. And then… go forward 🙂

2 thoughts on “Paleo… is it worth the weight?”

I'm a 30 something (EARLY 30 something!) girl who has embarked on the journey from normal to Paleo. I'm feeling inspired by the fact that I am enjoying the change, losing weight and eating as much as I want, whenever I want! Our grocery bill has gone up but I think so has our wellbeing; its a three month trial and I can't wait to see how we feel and look at the end :)